After a significant amount of rain in late February, residents in our client's town had a considerable amount of flooding in their basements. The retainer pond system was stressed beyond capacity causing large amounts of water to flood businesses and road systems on a corner of Main Street. Residents and business owners contacted Powers Environmental Professionals to conduct a retainer system analysis to advise landowners of potential stress points and deliver findings to the local government. Powers Environmental Professionals contacted Remote Sensing Technologies to provide aerial imagery of the entire extent of flooded  damage among three retainer pond system, running east to west. The flooded area additionally impacted the area's medical facility. For this analysis, RST utilized a 640x336 FLIR XT 30MHz Radiometric camera on a DJI sUAS, a DJI sUAS RGB, both still and video. Map to the right identifies the three critical areas of interest: 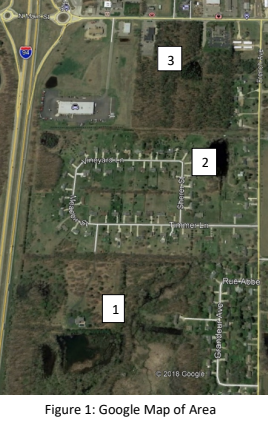 Pond 1 Pond 1 is the farthest east in the networks. The system flows through a network of channels as displayed in the attached thermal video. The systems seem to be acting as designed. This drains into directly into the Pond 2. The flow of water can be seen in the thermal video. Pond 2 is where the primary breach is identified. The Google Earth photo to the right displays the pond in a normal state. The thermal image shows the pond in a stressed state. Of note, the stream to the west (top of the thermal photo) indicates a breach in the pond (A). This breech moves to the south (B) until it stops. There is also a curved trench running towards the west then the water expands throughout the area until it combines with Pond 3. A: This point is where there is a breach in the entire system. It is roughly 2-3ft in diameter. This breach runs into a human-made trench leading to the south until it stops at B. On the ground at point A are displaced sandbags. B: In this thermal image one can see that the humanmade trench system off of this retaining pond comes to a stop at this point. C: At this point, a humanmade trench dug comes to a stop, and the water opens up into a natural runoff expanding into the parking lot of businesses, (including the medical center) Main Street, and Pond 3. This image is the thermal overhead of the trench system that ends south of Pond 2. This shows Point B and Point C displaying where the humanmade trenches stop and the water opens up naturally flowing to the west towards Pond 3. This figure facing west shows the flooding of Pond 2 into Pond 3, business parking lot, and the flow of the water onto Main Street. 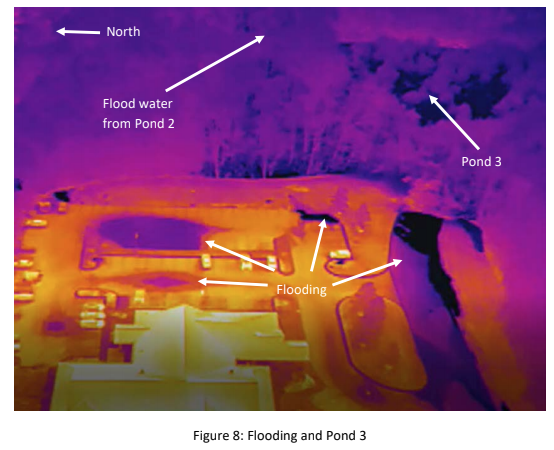 This figure is facing back to the east from Main Street shows the flooding of the parking lot, the Pond 3 and the runoff from Pond 2.